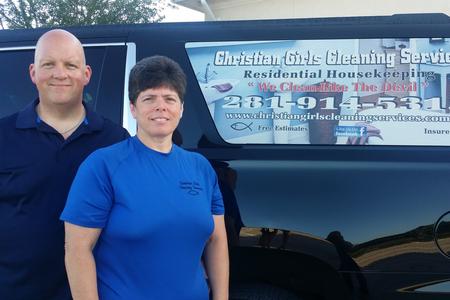 Our story appeared in Covering Katy Magazine. Please read the article below to learn how our business was born and get to know us!

It’s not unusual for people who work in the corporate world to wonder what it would be like if they could be their own boss.  Sharon Chesser is no different, but unlike most people who simply think about becoming an entrepreneur, she actually left her job and took the plunge.

“I remember her saying I want to own my own business.  I guess from her parents being entrepreneurs,” her husband Tim Chesser said.

Sharon’s parents owned a couple of retail stores.  Sharon’s career began there and she later worked for a corporate retail operation as an accountant and manager.  For 17 years she put up with the daily grind, but as the years went by her entrepreneurial flame never burned out.

“She had enough of the office, and the commute time,” Tim said.

“I wanted to have my own landscaping business,” Sharon said.

“There’s only one problem, she can’t back up a trailer,” Tim said with a smile.

So Sharon proposed having a home and window cleaning service.  After considering the idea both Tim and Sharon decided that was the right choice for a small business. Sharon was thrilled that she and Tim had finally agreed on the right business.

“She jumped up off the couch, started taking notes, went to Home Depot, came back and started cleaning the windows,” said Tim.  “She developed her secret formula for streak free window cleaning and mastered the art of window cleaning on our own windows at home,” he said.

Over time there was more demand for house cleaning than window cleaning and her business started to grow.

“We got the DBA of ‘Christian Girls Cleaning Services’ in April 2014,” Sharon said.

She began cleaning homes by herself, and getting new business by word of mouth.  Working alone she could only clean one or two homes a day so by June of 2014 her first employee was hired.

“It was a good friend of mine who worked for the school district. She worked for me for the summer,” Sharon said.

The business became so successful that she had to start using the family Suburban.  Sharon provides all of her own cleaning products, and uses lots of microfiber cloths and mops.  They all take up a lot of space in her vehicle.  “No cotton mops or feather dusters on our watch,” Sharon said.  We clean it right!

“We use at least 9 different towels and at least two microfiber mops in each house.  I’m not going to cross contaminate, and I’m not going to bring the dirt from one house to another,” she said. That is what Tim said makes the “True clean difference”.

With all her new employees and new customers, Sharon had to sacrifice her favorite Chevy Camaro because it couldn’t hold all of her cleaning supplies and employees.  A second Suburban was added to the fleet.  Both have the Christian Girls logo in the rear windows.

“When the team enters your home, two of us go directly to bathroom. We disinfect, we don’t just make things smell good,” Sharon said. “You will get the same service every time we are there.”

One customer said “Don’t let the name Christian Girls fool you, they clean like the devil.”  Sharon and Tim liked the line so much it’s now part of their logo.

Tim handles the advertising, social media, marketing and equipment repair.  His full time job is in law enforcement so he also conducts all the background checks on potential employees before they’re hired.  The company is also fully insured and carries workman’s compensation insurance in the event an employee becomes injured in a customer’s home. This takes the liability off the customer!

“We started with a prayer and minimal equipment,” Tim said.

The hard works has paid off, not only in revenue but in personal satisfaction for Sharon.

“She has not been this happy in 20 years.  She’s finally doing what she wants to do,” Tim said.

“My rule is if you aren’t having fun then you shouldn’t be there,” Sharon said.

Sharon plans to continue expanding but she does not know exactly how big the company will become in the future.

Sharon has lived in Katy for 35 years.  She and Tim have a 19 year old daughter, Brittany and they attend Second Baptist Church’s new 1463 campus.  They live in Firethorne and their primary service area is Katy, Fulshear, Richmond and Rosenberg.

“Business has grown at a steady pace, but fortunately it has been easy to control.  As business grows God sends the right person to add to the team,” Sharon said.

Through it all, Christian Girls Cleaning Services has maintained a 5 star satisfaction rating from its customers and Sharon has achieved her dream of owning and operating her own small business with her husband Tim.